Put the Kids First in Divorce 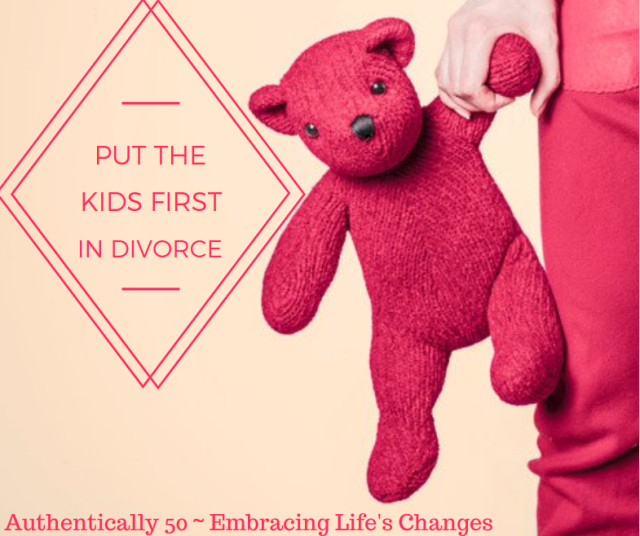 We know we need to put the kids first in a divorce, but sometimes it’s hard when we are dealing with so much emotion ourselves.  However, I can’t stress enough how important it is to keep tabs on how your children are feeling, no matter how old they are.  Little ones, teenagers and adult children all react differently when faced with their parents’ divorce, but they all have one thing in common – they can blame themselves and they can feel bereft when one parent leaves the family home.  It’s not easy for kids to assimilate into the new normal and it takes time to heal, just like it takes for us.

I’m watching as my older teenagers deal with their dad and it breaks my heart.  His distance, both emotionally and physically, is affecting them.  As much as I remind them that their dad loves them very much and that he needs them as much as they need him, it’s his disconnection that they feel most acutely.  The frustrating part is that I can’t fix it, because I can’t fix him.  Just like I couldn’t make him love me or work on the marriage,  I can’t make him keep in better contact with his kids or spend more time with them in meaningful ways.  He’s almost like a child himself.  Sure, he works hard and travels a lot which makes it difficult because he’s not nearby.  But when he is here, he is in his own world.  He doesn’t connect with them easily or with anyone else.  I have tried to connect with him.  I have told him about the kids so that he has good subjects to talk about with them and I always say yes when he tells me at the last minute he wants to see them.  But they feel it.  The worst part is that they remember the dad who was involved in their lives, who was a good dad, who talked and shared with them and they miss that dad a lot.  They simply don’t know how to deal with the stranger who has taken his place.

It doesn’t help that others have gotten involved in the situation.  His mother witnesses the disconnect between her son and our kids.  She keeps telling the kids that she feels sorry for daddy (her son, their father) because he’s all alone and how great he is that he drives to see them every few weeks for an overnight.  The kids resent her interfering and for putting the blame on them for not connecting with their dad.  They came home last night to me all upset because of it.

They kept asking me why Grandma should whine and complain about ‘poor daddy’ when it was his choice to leave?  Why should Grandma make them feel guilty about daddy being alone or driving far to see them?  Why doesn’t Grandma not feel sorry for them when they are hurting too?  Instead, she only feels sorry for her son.

I try to keep a clear head and explain how she worries about her son, just like I worry about them.  I stay centered as I let them vent and ramble about their feelings, holding them close and trying to soothe their unrest.  But it’s anger that is welling up in them that I can’t change and I need to get them to a counselor, even though they are refusing.  They know they can talk with me and often do, but it is a situation between their dad and them that they can’t make sense of at all.  How does someone just not really care anymore?  And yet, I tell them that he cares.  I remind them that he visits.  He texts them sometimes.  He calls about once a week.  Their response is that he never answers their texts and they can’t rely on him.  They answer him, but the lag in getting a response from him can go from hours to more than a day.  I explain that he is busy working.  They say it takes ’30 seconds’ to answer a text and they blame him.  I feel for them because he doesn’t answer me either and it’s frustrating.  I’m used to it now, but they are fed up.  I understand that it’s a different relationship, a different situation for I’m the STBX wife and he can’t be bothered.  But for them, there is no such excuse and they are ready to tell him off.

Their dad was a good father, a good husband and I stand by my decision to have married him so many years ago.  I always tell them that when they are criticizing him.  When they asked for a new dad that they want to approve, I tell them that I did give them a good dad and I remind them of all the good he did when they were little.  Whatever happened with him to have him change so drastically is unknown to me.  I stopped trying to figure it out.  I just let him be and I continue to be the best mom/dad I can to my kids in the meantime, with the hope that he will just snap out of it one day, just like he snapped into this disconnection.

But it reminds me of that song by Harry Chapin, Cat’s in the Cradle.  Kids grow up fast and they need their parents’ attention, to feel special and loved, to be interested in how they think, what’s going on in school and about them.  Not the other way around, although I think it’s good to talk with your kids about your life as well (making sure though that you don’t share too much or make them feel as if they are supposed to make you feel better).  That’s your job.  You are responsible to parent your children, not the other way around.

I understand why Grandma is concerned.  It’s quite evident that there’s a brewing unrest in the relationship between her son/their dad and the kids.  I wish I could ask her to take a different tactic, but that’s not possible.  I admire that she’s trying to get them to connect.  I sympathize with her because she’s having a hard time getting her own son to connect with her.  But to put the blame on the kids (because that’s how they see it), is not helping her to connect with them, nor with their dad.  It’s producing the opposite affect.

It’s difficult enough for kids to watch their parents’ divorce.  My only advice is to try to take the high road and not talk badly about your ex.  Kids are smart.  They can see things that even we don’t realize they understand.  You don’t need to badmouth your ex.  That only complicates life.  Instead be supportive to your kids.  Let them talk with you.  Comfort them.  Help them to heal.  Your ex is still their dad and you chose him at one point in your life.  Be responsible.  Don’t throw him under the bus because you can.  Be the better person.  You don’t have to lie to the children, but you don’t have to make them choose sides by making him out to be a bad person.  Whatever you feel as a spouse, that’s your business, not your kids’ and that’s a separate situation.  Keep it separate, unless of course there’s abuse involved and that’s a separate situation altogether.

Does that make sense?  Have you had a similar situation in your home?  Please share as I feel very alone these days.  Thanks.

1 Response to Put the Kids First in Divorce