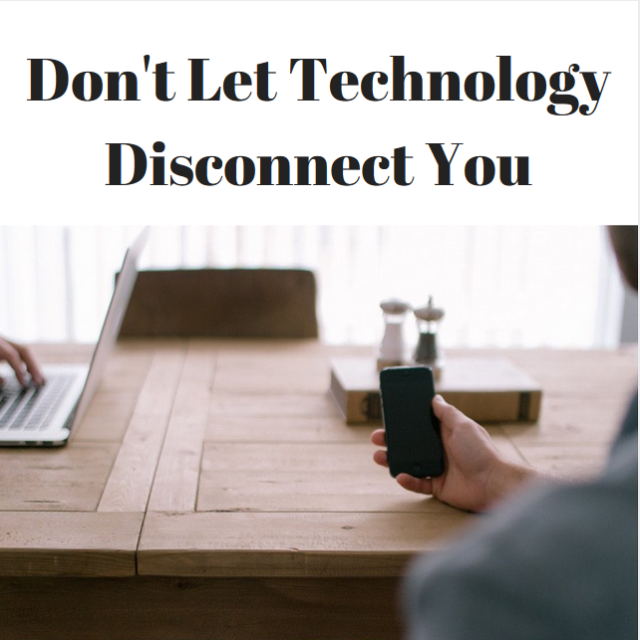 You already know this, don’t you?  When you’re sitting there at the kitchen table with your spouse, you shouldn’t both be on technology.  Make an effort!  Talk to each other.  It’s when you disconnect so completely that the marriage falls apart.

Sometimes people use phones or computers to put distance between themselves and their partner intentionally.  It’s easy to say there’s more work to be done or I have to answer this email or text because it’s work or it’s a friend having a problem.  I understand and I’m not against you doing what has to be done, but realize this:

When you put someone else or work before your spouse while you’re sitting there with them, it hurts.  Do it enough times and it becomes a habit that builds resentment and sometimes distrust.  Continue to do it and the disconnect with your partner grows wider until one day you might look up from your phone and poof – she’s gone or he’s gone.

By your perspective, you may think that you had to answer that work text and she should be grateful that you are such a hard worker and so important to your company.  Believe me.  She’s proud of you.  But…you’re home and she’s waiting around to be with you, to connect with you and you’re blowing her off big time, repeatedly.  And that, my friend, builds distance and not connections.

I know that men in high powered jobs work long hours.  I sympathize that when you come home you just want to veg out on the couch and channel surf or watch the big game and be left alone.  That’s fine for a little while.  We all need to relax and disengage from the day’s stress.  But remember that there’s a wife nearby who’s not needy so much as wanting to be with you because she loves you.  It’s not neediness no matter how you think that in your head.  She wants to share her love for you and is secretly hoping that you’ll look up from your phone to see that she’s made an effort to look nice for you or gotten a little sexy nightgown or whatever.

When you become so engrossed in your own needs and don’t pay attention to her, you lose.  You lose out on being loved and loving her.

I’m not saying that it’s the husband’s fault here even though the example was the man who was the main character.  It happens with women as well that they become selfish and not thinking that they have a husband right along side of them who wants to share the evening with them too.

It’s one of those patterns we need to break in order to sustain a marriage.  Nourish the marriage.  Try to give more than you take and you will find that your partner for the most part will do the same!  What a great way to live, don’t you think?

This entry was posted in divorce, love and tagged communication, connecting with your spouse, give more than you take, marriage pattern, men and women, relationships, save your marriage, selfish. Bookmark the permalink.