Cutting The Ties That Bind Me 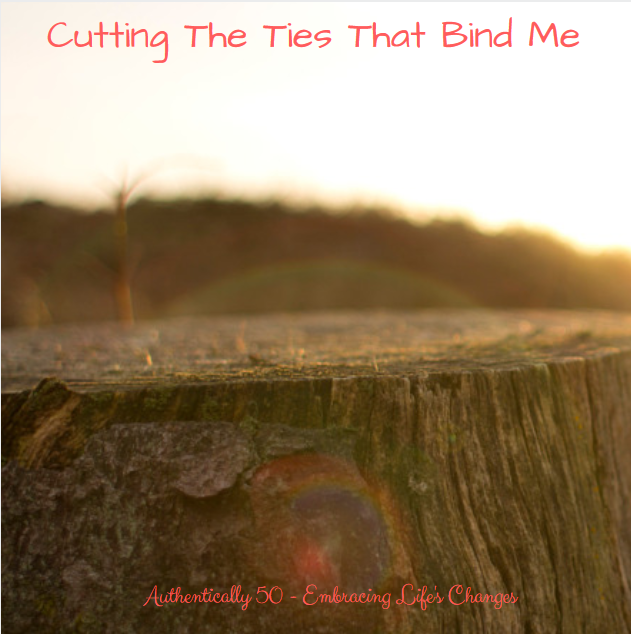 It’s not easy for me to let go.  Let me just say that upfront.  I am the type of person who tries to see the big picture, to give the benefit of the doubt and to try not to take offense when someone is hurtful.

But as much as I have felt it’s the good girl’s role to do those things, they’ve been a hindrance to my cutting the ties with my EX’s family.  Time and again, I’ve made excuses for their bad behavior, but I’ve had enough.  Finally! as my friends have said recently.

It clicked yesterday and the door shut on my waffling between cutting the ties and leaving the door open in case they wanted the relationship that they continue to say they want.  Truthfully, their actions have spoken louder than their words, but I was deaf to it.  Until now.

As my kid so intently put it, You are trying to be the good girl, to do what’s right and to be kind.   You are worried about their gossiping about you and making up stories.  But they are already doing that and they have been ever since Dad left us.  You and I know the truth of the situation.  Who cares what they think or say?  As your kid, I know the truth so I don’t listen to their gossip.  I know who my Mom is and that’s enough for me.

Then my kid left to spend the required overnight visit with Dad and the grandparents.  I went back into the house alone and cried.

You’d think it would be easy as everyone tells me to just be done with them and not think about it.  Friends advise me to live my life and not care.  So why do I continue to care?

I spent 26+ years as a part of their family.  As my MIL (mother-in-law) said a few weeks ago when I saw her,  I really wish you had had an affair so that I could hate you.  It would be easier for me, but I know you didn’t.  I replied I am not that type of person and never have been.  I know this whole situation is hard on all of us.  And then I dropped the subject.  But her words startled me.  Who says things like that?

What held me in the chains of connection with them was my bond to her and to her husband.  They were like my own parents, that’s how close we were.  But it’s obvious that she’s having a hard time in accepting that her son walked away from his wife and kids without explanation or cause.  He just didn’t want to do this anymore.

As a Catholic who doesn’t believe in divorce, this was hard for her to accept.  But now she is apparently over it and rejoicing that her son is divorced and dating, but can’t seem to figure out where I fit in her life.  I can’t be in her life and yet there’s a piece of her who wants me.  But on her terms, when it’s convenient for her and when her son is out of town.  There’s the guilt that she feels because she knows he chose to leave his family and he’s a reflection on her.  In her own mind.  And she’s perfect, so he’s not acting perfectly.  Until now because he’s saying he’s happy with the new girlfriend.  Funny how the Catholic thing can be dropped by the wayside when it’s convenient.

It’s a twisted relationship for sure and I’ve got to cut the ties that bind me.  I don’t have time for toxicity in my life these days.  Onward and upward, right?

16 Responses to Cutting The Ties That Bind Me